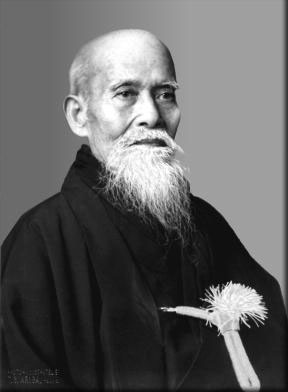 Aikido was founded circa 1925 by Morihei Ueshiba (1883-1969), known to his followers as O'Sensei ("Great Teacher"). Although it reflects the knowledge gained in O'Sensei's many years of practice in other martial arts, Aikido is an unique and subtle art in its own right.

"Aikido" can be translated as "A way of coming to harmony with the life force of the universe." AI translates as "harmony", KI as "universal life force" and DO as "way" or "path."

The goal of Aikido is to bring the practitioner to self-realization and ultimately to unite the mind and body with nature. The purpose of executing an Aikido technique is to subdue the attacker with as little harm as possible. In Aikido, it is not intended or desirable to injure the attacker.

Aikido techniques are not to be used to achieve physical victory over an opponent, but rather to conquer one's own limitations, fears, and weaknesses. Rather than relying on brute strength, Aikido utilizes the aggressive energy of the partner. The Aikido practitioner will first blend with the aggressive partner's force, then lead the energy into a circular path. Practice on the mat teaches us the life's lesson of moving in harmony with the aggressive partner's energy, which serves us not only in the dojo, but also in our day-to-day human relationships.

Who is it for?

Because Aikido utilizes the principle of harmonizing energy, rather than physical strength, it can be practised by all who choose to do so, regardless of body size, strength or age. Benefits include improved health, confidence, presence of mind and a more relaxed attitude.

O'Sensei dedicated his life to the study of Aikido and he initiated the spread of the art and philosophy of Aikido throughout the world. In spirit, we invite everyone to begin the path of Aikido.