A Short History of a Great Teacher. 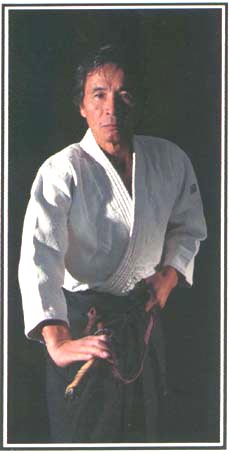 Born on March 2, 1933 in the prefecture of Osaka. His father was a Kendo teacher, so he started his martial arts practice from very early age. His diligence and thoroughness in practice, bright mind and natural charm made him later one of the favourite disciples of Morihei Ueshiba. He had become an uchi-deshi (the student, living in one house with the teacher) of the Founder in 1953.

In 1964, Tamura sensei went to France to spread Aikido in Europe.

In 1969, he became an official General representative of Aikikai in Europe.

By 1973, a so called "national method" was created by Tamura sensei along with Hiro Mochizuki and Andre Noquet as a guidance for techical perfection for Europeans.

In November 1975, master Tamura was given the high rank of the 8th Aikikai Dan. According to Kishomaru Ueshiba, "Nobuyoshi Tamura is one of the oldest students of the Hombu Dojo who practiced under the direct guidance of the Founder. He is Shihan who teaches in the full accordance with our principles. Making known and spreading Aikido in Europe, everywhere he carries the noble spirit".

Throughout many years of his work in Europe, Tamura sensei has gained a big authority and influence, today he is one of the leading figures in the world of Aikido. He has written several books on Aikido, represents Aikikai Tokyo in Europe and is a Technical Advisor of the National French Federation of Aikido and Budo.

He meant so much to so many students, friends and especially, of course, his family.

He was the personification of Aikido both on and off the mat and was always very much the perfect gentleman.

His contribution to Aikido throughout the world means that his legacy will live on.